Keep in mind there’s a difference between old and junk

With dealerships opening but consumers still cautious with their loonies when it comes to car buying, the OEMs have opened the tap on incentives to coax them to the dealerships. But there’s always room for another incentive to turn shoppers into buyers.

One suggestion is to revive the Retire Your Ride (RYR) program that was popular during the Great Recession of 2008 – 2009.

Steve Fletcher remembers the program fondly. Fletcher is the managing director of the Automotive Recyclers of Canada (ARC).

Formed in 1997 as an “association of associations,” ARC is the national voice of the automotive recycling industry, representing, through its provincial affiliates, over 400 end-of-live vehicle (ELV) recyclers and dismantlers throughout Canada.

“Under Retire Your Ride, a running, driving, licensed and insured 1995 model year or older vehicle could be traded in for $300,” he recalls.

“A National Code of Practice (CoP) was established for recyclers participating in Retire Your Ride to ensure the vehicles were retired responsibly. The overall idea behind the program wasn’t so much creating an economic stimulus, as promoting emissions reduction.”

In other words, the Canadian program wasn’t about helping sell new cars as it was about getting less fuel-efficient vehicles off the road.

Fletcher recalls that because of that rationale, the program found a champion in Environment Canada and some of Canada’s environmental groups.

ARC worked with the federal government to help build the program.

Fletcher credits ARC members with making sure that the junkers didn’t make their way back onto the road. They picked up the junkers and scrapped them, stripping them for parts.

The program developed momentum when automakers offered up to $1,000 incentives for junkers. The program ran for nearly three years and paid out $80 million.

RYR wound up on March 31, 2011. By January 2011, the program had surpassed its original targets and had permanently retired over 120,000 vehicles and reduced thousands of tonnes of smog forming emissions

Fletcher warns against relying on a scrappage program to stimulate sales. That’s what the U.S. did during the Great Recession. The U.S. version, called the Car Allowance Rebate System (CARS) but colloquially known as “Cash for Clunkers” ran for 60 days and offered vehicle owners up to $4,500 in incentives to trade in their old car for a new one. The program devoured nearly $3 billion in 60 days.

Program management lost track of about 60,000 vehicles. It’s suspected many were simply cleaned up and resold.

And with an incentive that hefty, many buyers who would have looked to the used market, bought new and used dealers suffered.

“If you are doing a scrappage program,” Fletcher warns “Do it smart so you’re not just buying just any car off the road.”

The organisation continues to run the RYR program today. Owners with any vehicle they want to retire can go to RetireYourRide.ca, where they can auction off their ride.

Bidders are ARC members only. Winning bids vary by province, type of vehicle, condition and location with the average bid in the $300 to $400 range. The winner picks the clunker up at the owner’s home free of charge and the owner gets paid at the door.

The auction process retires 10 to 30 cars a day across Canada. Each sale is tracked to make sure the car is scrapped.

Fletcher says dealers often refer their customers to the site should they come in with a vehicle that has no trade-in value.

Should manufacturers be considering an RYR program, he offers this advice.

First of all, go with an incentive in the $1,000 to $1,300 range as they did in the past, with either the automaker or government or combination funding that amount. Anything over that threatens the used car market.

Once the dealer judges the customer’s trade-in fits the RYR criteria, the vehicle goes up for auction on the ARC site. The winning ARC member picks up the car at the dealership and pays the dealer. There’s no waiting for a government cheque. So, the dealer is happy while the environment benefits because an environmentally unfriendly car is off the road. And most important of all, the vehicle winds up as scrap with its VIN taken off government records.

Given ARC’s experience with RYR, Fletcher’s advice to automakers is to let his organization run any $-for-clunkers program they have in mind.

“We are looking at the big picture. We want to make people aware that the RYR program is still operating. So, if someone wants to put an incentive behind it and turbocharge it, we have the tow trucks and capacity to handle all of that throughout Canada – even the North West Territories.”

Originally published in the October 2020 of Canadian AutoWorld 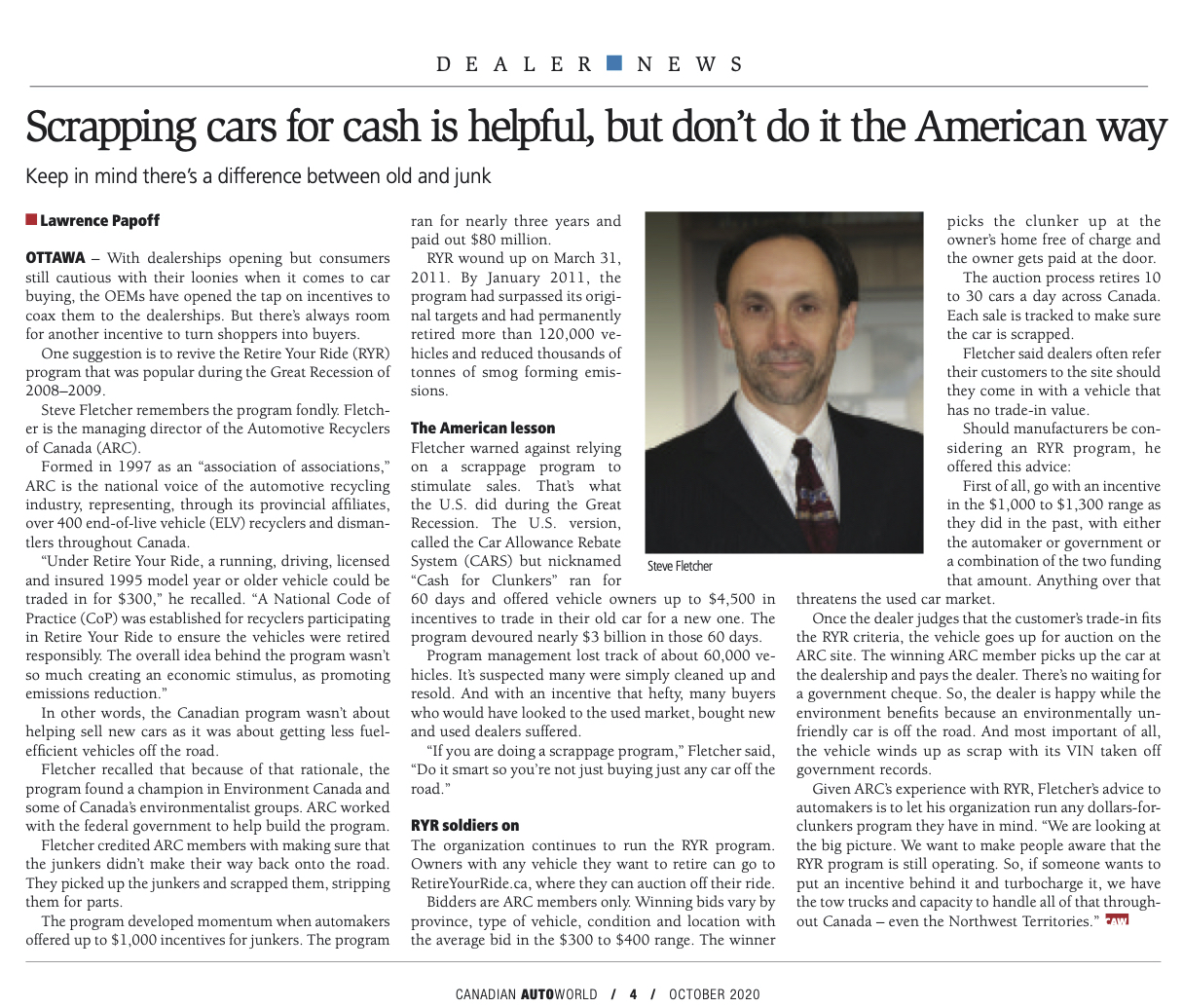 The post Scrapping cars for cash is helpful but don’t do it the American way appeared first on Automotive Recyclers of Canada.