The Fate of Your Vehicle

Note: originally published in 2011 in CAA Magazine – we have made some progress in Ontario.

How to ensure your old clunker doesn’t become an environmental hazard.

It’s probably not something you’ve ever thought about, but where you take your vehicle when it reaches the end of the road can make the difference between an environmental disaster and a model of environmental responsibility. The truth is, not everybody handles end-of-life vehicles (ELV) and vehicles that have been in accidents the way they should. Steve Fletcher, Executive Director of the Ontario Automotive Recyclers Association (OARA), has heard some of the horror stories.

With many automotive recyclers, trying to extract the most value from an ELV by cutting environmental corners is unfortunately a growing practise. “Our members, however, follow a very strict code of practice in the way they handle a vehicle. they spend a lot of money to build and maintain facilities that are specially designed to capture and store potentially harmful operating fluids and other toxins such as mercury and lead. We keep all of that stuff contained and prevent it from contaminating the soil and groundwater. The technicians who do the work are trained to follow a methodical process that maximizes the amount of material that can be reclaimed and minimizes the environmental impact,” says Fletcher.

The problem, Fletcher explains, is that not everybody follows the same protocol or plays by the same rules.

“We know of some scrap operations who buy cars just to crush them and sell them for the value of the metal. They don’t drain anything and they don’t do anything to protect the environment. And when metal prices are high like they are now, those guys really come out of the woodwork.”

Fletcher says their members remove an average of 40 litres of potentially hazardous fluids from each vehicle, as well as lead, mercury and ozone-depleting gases. “All the oil, gas and other operating fluids pose a significant risk to the environment if they’re allowed to just leach into the soil. Our members carefully drain all the fluids and store them for reuse or recycling.”

Fletcher adds that gas tanks, batteries and tires are all removed and recycled, reused or disposed of appropriately. The vehicle is then sent for dismantling where usable parts are removed for resale.

“By the time our members crush a car, it is a clean, dry hulk that poses no threat to the environment. Only then is the unusable portion of the vehicle crushed and sent to be shredded for metal recovery,” says Fletcher.

Incredibly, there is currently no legislation that dictates how an ELV has to be handled, although the OARA is working with the provincial government to set environmental standards for the processing of ELVs. The OARA is also working with environmental groups and a number of leading auto manufacturers who have recognized the need to ensure ELVs are properly processed at the end of their operating lives.

“When people are done with their vehicles, they really need to be aware of who they’re selling it to. It can make all the difference in the world,” says Fletcher. 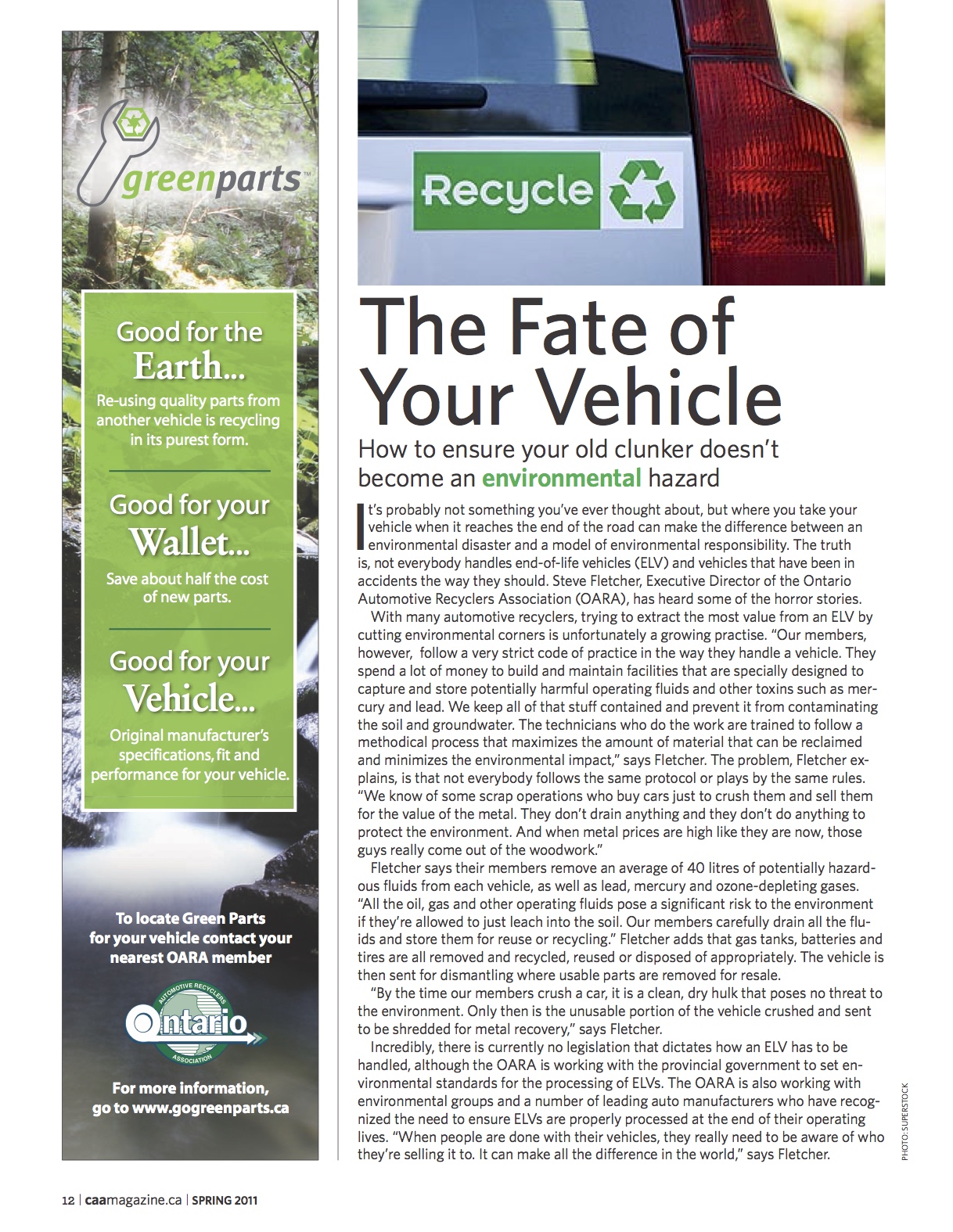 The post The Fate of Your Vehicle appeared first on Automotive Recyclers of Canada.