When a business is a proud community partner, the impact is larger—and so are the numbers on the fundraising side of things because it’s easier to capture media attention.

Tire Take Back has generated more than $1 million over the last seven years to support the Sunshine Foundation of Canada, which makes dreams come true for children living with severe disabilities or illnesses. Many of the dreams fulfilled by Sunshine involve visiting Walt Disney World, so Logel’s Auto Parts issued a press release in a province-wide effort to send kids to Disney by bringing in their scrapped tires. In doing so, they were able to garner media attention to both the cause and their business.

“Community involvement is important to us at Logel’s because we’ve been in business at the same location for almost 60 years,” says John Logel Jr., the Owner of Logel’s Auto Parts. “We have deep roots in Kitchener, and we believe it’s important to give back to the community that has helped us have a successful business for three generations. Plus, it gives us a chance to get our name out there and hopefully educate the public about what we do.”

Community awareness campaigns
Auto recyclers’ community involvement doesn’t stop at fundraising. Most of the members have some sort of interaction with their local first responders and supply cars for extraction and vehicle fire training.

Many also have partnerships with organizations like MADD, and will donate a wrecked car to be placed in front of the local school around prom night with signage on the dangers of drinking and driving. 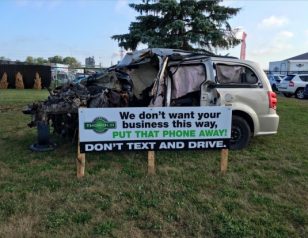 Thorold Auto Parts in Niagara has done a lot of work on texting and driving awareness, too. Thorold placed a wrecked car out front with a sign indicating this is what can happen when you text and drive. This project has now morphed into a full marketing program. It’s just a great opportunity to talk to the media about what auto recyclers are about.

Taking it to social media
Our role as the association is to support those members who understand that you need to have a community profile and fresh content. If one recycler is doing something anywhere in Canada with a community angle, we’re pushing it out to our members via social channels like Facebook and Twitter.

More of the members understand this, and they’re looking to the association for a flow of fresh content. We always say we want you to be the go-to auto recycler in your community. We don’t want people to like OARA’s