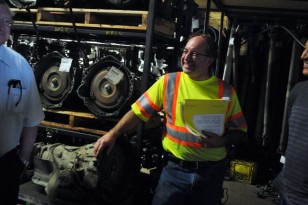 Red Wing Auto Recyclers owner Bruce Ehman shares a laugh during a tour of his facility he provided at the close of a Saskatchewan Waste Reduction Council workshop in Prince Albert on Tuesday. Ehman’s business is considered by the organization as one of the most environmentally friendly auto recycling facilities in the province.

An old commercial jingle sticks in Bruce Ehman’s head when it comes to recycling auto parts rather than allowing them into a landfill site.

Such is the rationale at his business, Red Wing Auto Recyclers.

Located a few kilometres north of Prince Albert, Ehman’s business of 11 years was commended by the Saskatchewan Waste Reduction Council on Tuesday for boasting one of the province’s best environmental records for an auto recycler.

Environmental stewardship just makes sense, Ehman said with a shrug, lamenting the actions of some other auto wreckers in the province who do not adhere to regulations.

“Once we’re done in taking our fluids and everything, they crush the cars and haul them away and recycle the metal,” he explained.

“But, you see the trailers come in and they’re covered in oil that’s been leaking out of the vehicles that have been loaded, so obviously this stuff hasn’t been removed.”

There are many dangerous things in the average vehicle that the backyard mechanic should be cautious of, he said, citing gasoline, antifreeze, batteries, Freon, mercury, waste oil, lead wheel cables and battery cable ends as some.

“You don’t want to be destroying the area you live in,” he said, citing a mercury switch that turns the light on when you open a vehicle’s hood as a key contaminant.

“A small amount of mercury can contaminate a whole lake,” he noted.

Freon — particularly the R12 Freon that’s found in older vehicles, is known for destroying the earth’s protective layer of ozone.

Red Wing Auto Recyclers either recycles or ships these dangerous parts and chemicals to various places throughout North America where they are properly disposed of.

Not all auto recyclers go through this sometimes time consuming and pricey process, Ehman said.

“A lot of places just let it go,” he said. “That’s not the right thing to do. They might say it’s just a little bit, but every little bit ads up.”

The Daily Herald caught up with Fedyk at the Prince Albert Travelodge on Tuesday during her organization’s daylong fall workshop.

Although facilities such as Red Wing Auto Recyclers are tapped into the North American hazardous waste disposal world, the average homeowner doesn’t really have an option for hazardous waste, she said.

This is why the Saskatchewan Waste Reduction Council is lobbying the provincial government to introduce a household hazardous waste program — a “small part” of landfill waste, “but it’s the nastiest part.”

The post Auto recycler commended for its environmental record appeared first on Automotive Recyclers of Canada.