Toronto, Ontario — June 17, 2013 –Nothing gives us a lift like a big group of smiling, laughing and happy children. In this case, though, the kids got a lift too. The latest Sunshine DreamLift to Walt Disney World took place Tuesday, June 11, 2013. A Sunshine DreamLift takes a plane full of children to a special destination for the day. All of these kids are challenged by severe physical disabilities or life-threatening illnesses, and for many, the Dreamlift is their first chance to taste independence and experience the adventure of a first plane ride or a first day away from mom and dad.

Many volunteers give generously of their time to make sure the DreamLift succeeds, but a big part of the credit for this latest adventure goes to Ontario Automotive Recyclers Association (OARA) and Ontario Tire Stewardship (OTS) through the Tire Take Back Days program. Auto recyclers who participate in the annual event collect tires from the community, and then donate their Collector Fees to the Sunshine Foundation for a DreamLift. Tire haulers and OARA also provided matching funds.

This year, OARA and OTS helped to take 74 children, aged 7 to 17, on the adventure of a lifetime. The children were accompanied by a large contingent of health care professionals to help ensure a safe trip for them. Each child was partnered with a volunteer from OARA, health care or one of the 26 volunteer officers from the Metropolitan Toronto Police.

Susanne Robins is with OTS and served as a volunteer on the DreamLift. She describes the experience as overwhelming, but in a positive way.

For many of the kids taking part in the DreamLift, this was both their first airplane ride and their first full day without their parents. Many have never traveled before due to treatments, special requirements, or physical challenges involved in their daily lives.

“I think it’s very important to contribute and to take the time to see the impact of the dollars raised,” says Wally Dingman, President of Caughill Auto Wreckers Ltd. And Chairman at OARA. “My police partner and I accompanied two kids. They were both very excited, and that carried over to us.” 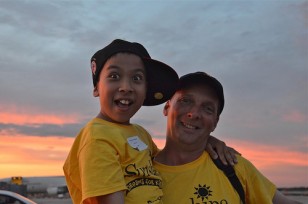 The day started early, meeting at Toronto’s Pearson International Airport at 3:00 a.m. for the flight to Orlando. For the parents, in most cases, it seemed to be a bitter-sweet moment. It was the first time most of the children children had been away from their parents, in another country no less.

It’s impossible to overstate the difference a DreamLift can make in the lives of these children. For the most part, their lives have been bounded by rules, either from health care providers or parents. For just one day, though, they were told: “Today is your day, no rules, if you want cotton candy for breakfast, ice-cream for lunch, you get it.” The kids took that to heart, with at least two of them seen holding bags of candy at 4 a.m.!

Greg Woodbeck of Woodbeck Auto Parts in Stirling, Ont., was one of the volunteers on this year’s DreamLift.

“I thought it was remarkable how much appreciation the children have for everything people do for them. It really stood out how they didn’t have a negative word to say, they knew that the experience they were having was something that people were making it for them,” says Woodbeck. “I have a lot of a admiration for how the day was about the kids being ‘normal’ kids, not kids with issues or kids in a wheel chairs. Just normal kids, having fun.”

Throughout the day, it was hard to tell who was more excited, the children or the volunteers. Asking the children what they were looking forward to at Disney, the favourite reply was “Having fun.” Sounds like a plan!

Upon arrival in Orlando, we deplaned on the tarmac to sweltering heat and high humidity. We were welcomed by volunteers from Orange County Sheriff’s Department who would accompany the children and volunteers to ensure that the children see what they want and get into what they want in a timely fashion. From there, everyone was loaded on to buses for the final few miles to Disney. Cheers went up as we entered the grounds.

Rob Smith of Erin Auto Recyclers in Erin, Ont., says one of the most emotional times of the day when he realized how other park visitors reacted to the kids and volunteers “fast tracking” through the lines.

“We’re not used to ‘butting in line,’ so you expect them to have a look and think “Are you better than us?” but it was just the opposite. People smiled and looked happy for us,” says Smith. “It was emotional finding that people’s reaction was opposite to what you’d thought it would be.”

After a group photo in front of the Disney Floral Garden, each individual group departed for their adventure. It was a real adventure for these kids, and the weather obliged. It wasn’t too long before the skies opened, thunder and lightning followed and most of the rides were closed.

Everyone was soaked to the skin, but did the children care? Not at all! They wanted to get on with their adventure! Eventually, after flooded streets and a good soaking, things opened again.

At 6:30 p.m., everyone excited and exhausted, we met to return to the buses and our return flight to Toronto. The children were very excited about their adventures, and we were all very tired. But it was the sort of exhaustion that comes not from hard and difficult work, but wonderful and life-affirming play. It was the sort of exhaustion that comes over you when you know that, no matter how hard it may have been or what you faced along the way, you’ve done the right thing and it was worth it. 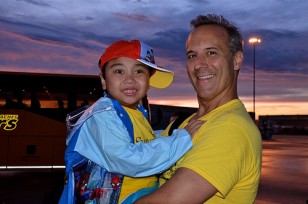 Dom Vetere and his companion ready to board the bus at the end of a long day. It’s an exhausting schedule, but well worth it.

“These kids are the real meaning of the word courage,” he says. “As a volunteer, you get out more than you put in. The joy in their eyes, their spirit and courage, these help to give you strength.”

We said good bye to our wonderful Florida team, boarded the plane with some very tired and excited children amd took off for home. This was a much quieter flight than outward. Our little charges were, for the most part, asleep.

We returned to Toronto after midnight. After passing through the usual details, such as customs and immigration, we moved into the arrival lounge so the children could reunite with their parents.

Each child and volunteer pair coming through the doors to the arrival area was greeted by huge applause and cheers by the parents. The children were reunited with their parents for huge hugs and many stories. Families expressed their gratitude to their child’s partners for the day with hugs, tears and flowers. Without a word of exaggeration, unbreakable bonds were fully forged that day. It’s an experience that can’t be verbalized. Our language doesn’t have the right words to fully express what it’s like. It’s something you have to experience directly to fully appreciate, and it’s an experience that stays with you forever.

Terri Courneya of Hotch’s Auto Parts in Bowmanville, Ont., agrees. She says the biggest take-away for her was to witness the bravery of the young people she accompanied.

“They left for the day without their parents on a plane with a group of people they really didn’t know. It must have been really hard for the parents as well to let their child go off for the day. I could see how excited they were for them but inside they must have been anxious about it,” she says. “It just amazed me to see how open the children were to share everything with us. I felt very lucky to be a part of the whole thing. I just wish we had more time.”