A recent survey shows the majority of the general public agrees there should be regulations in place to dispose of cars safely and properly.

The survey was conducted by Harris/Decima on behalf of the Canadian Automobile Association. CAA conducts polling with its nine member clubs across Canada and with non-members on a number of topics bi-annually. Both members and non-members are surveyed to ensure that numbers are representative of the general public. Over 5,000 people were surveyed regarding undriveable vehicles and vehicle disposal. 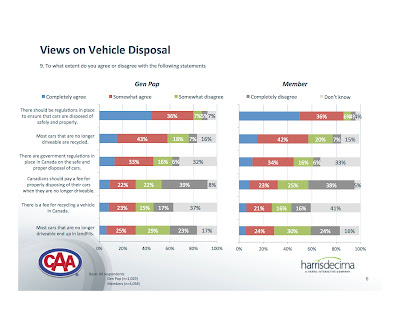 “The research was undertaken in an attempt to put numbers to what we already figured was public perception. Most people think there is legislation around vehicle recycling,” said Teresa Di Felice, Director of Government & Community Relations for CAA South Central Ontario (CAA SCO). With 1.8 million members, South Central Ontario is the largest CAA club in Canada. Di Felice advised that CAA uses this data to help with positions on policy making. Di Felice joined with OARA back in July of 2011 to put vehicle recycling on the radar of government.

Steve Fletcher, Executive Director of OARA said, “These results help us show that the issue resonates with the public. In all my years in the industry I have never seen anything like this data. It’s always helpful to have data to back up what we have been saying for years.”

The survey asked what people do with their cars when they are no longer driveable. The majority either trades it in, or has never disposed of a vehicle before. The minority drops it off at an auto recycling facility or scrap yard.

“We wanted to take a cradle to grave approach on vehicle ownership and we used the survey as a tool to ask members what they know,” says Di Felice. “With Autogreen and OARA it makes a lot of sense. There are things people can do to lessen the impact on the environment. People think end of life vehicles are taken care of properly. This survey helped us cement our position on policy regarding vehicle disposal.”

“1 out of 4 drivers in Ontario is a CAA member. And the survey came back with results showing what the general public understands about end of life vehicles. The data ended up validating that there is a gap in what drivers expect happens to their old cars and what actually happens,” says Fletcher.

OARA is leading a coalition working towards a standards-based licensing scheme for the auto recycling industry. Other members include CAA, the Canadian Vehicle Manufacturers Association and the Association of International Auto Manufacturers of Canada. The group has met with senior government officials.